Hey, everybody, I’ve been putting together reading orders for events recently, and I just started my latest for King In Black. Check it out and feel free to correct me if you think any part of my ordering is off.

I’ll get around to updating this next week guys. Sorry, but the holidays and a daycare closure sent me into a bit of a tailspin with website updates.

Pffttt… excuses… I got day salary job, been moonlighting contract work at same time, got a puppy to chase, kids to wrangle with at home schooling, do most of the cooking and cleaning around the house… and I still mess around here on CHU… I expect more @drunkwooky

Yeah, but how many competing mental health issues do you have? Huh? HUH!? That’s what I thought.

Also, two cats and a 110 lb furry missile of liability they call a Newfoundland poodle who doesn’t know he’s an adult.

but how many competing mental health issues do you have?

You’ll have to ask the wife. I’m sure when I tell you there’s none my wife will correct me cause I’m mentally unstable…

These wives are so eager to tell us everything that’s wrong with us. Hey, you’re the one who bet on this supposedly lame horse.

Ok. It’s up to date other than filling in Atlantis Attacks and Spider-Woman.

Atlantis Attacks #5 doesn’t really tie-in. One single page mentions KIB. I blogged about how my annoyance with that a bit ago… 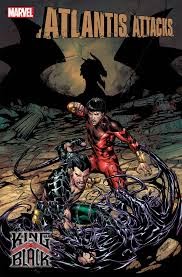 Good to know. It’s kind of like back in the good old days when there was that Thor event and the only mention in all the other Marvel title was “what’s with this unseasonable snow, huh!? Crazy! Oh well, moving on.” Or how in Iron Man during Secret Wars they had to explain that Rhodey just started patrol in the Iron Man suit whileTony was missing. “Cross over” was very lite back then.

I thought about it and remembered the term, “Red skies.” When a comic slaps a big, visible "Crisis Crossover" logo on the cover, but has only a token Shout-Out to the Big Event that only peripherally affects the plot of the issue in question, that's a Red Skies Crossover. In some cases, the extent of …

Yep! That’s the trope! Thanks for the read on that.

I update the list after reading Atlantis Attacks #5. That was the lamest excuse to cross over. They even put the shadow of a symbiote dragon on the cover. Such a bait and switch.

I was perturbed. The comic was perfectly good without a single page mentioning an unrelated cross-over.

Updated this through King in Black #3.

Have you figured out how the Namor mini-series relates to all this? I’ve read the first two issues and am kinda befuddled.

Iron Man wants Namor to release the Black Tide to fight Knull. Namor’s going to but fears having to take them captive again.

I’ve actually quite enjoyed this read. We’ve not really talked about #1 which has a bunch of firsts (I think).

Not yet. There’s “a darkness” or “a shadow” trapped in a crystal by ancient Atlanteans, and it has been disturbed by surface-dwellers. It relates, but I think Ewing is staying safely clear of messing with Cates’ story until the time is right.

Agreed, I think holding onto #1 is a good long term spec.

Okay, thanks for clarifying, everyone. Was a bit confused.

The Namor issues have been hard for me to get through tbh.