No, it only looks that way to people like you. You earn what you’re worth. I don’t care if you get the $25/hr agreed to by your employer or $10/hr… cry me a river… see how that sounds. Her value is worth more than yours and mine and every one in here. People PAY MONEY to watch her do her job. Do people pay to watch you do yours?

Isn’t she already the highest paid actress. I would be more pissed that Thor, Cap, Iron Man, Cap Marvel, Black Panther, Dr Strange, Guardians all got more movies than me that’s a lot more missed out on.

I think she’s got most of the men beat in minutes. I think she only got 400k for Iron Man 2 and had only 9:15 total screen time for her character. Not a bad pay day for 9 minutes (even though there’s a lot more work involved, but still… ) 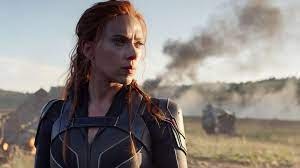 Scarlett Johansson is Suing Disney over, "Black Widow," and its Theatrical...

Also, this all seems really on brand for her, and could also be seen as, in some aspect, standing up for everyone (maybe specifically women actors) in the future who might face something similar when the ground just shifts. She’s using her position/clout in a way that likely will have ripple effects.

I think the issue comes from Disney owning ALOT of the media/entertainment channels and they broke/leaked the news of this and made the headlines seem like Scarlett was being irrational sueing Disney.

Took my daughter to see Black Widow tonight! Went to the theater for the 1st time since before COVID. Wanted to make sure Scarlett got her percentage of my money!

No, it only looks that way to people like you. You earn what you’re worth. I don’t care if you get the $25/hr agreed to by your employer or $10/hr… cry me a river… see how that sounds. Her value is worth more than yours and mine and every one in here. People PAY MONEY to watch her do her job. Do people pay to watch you do yours?

This actually helps. I’ve been doing some reflecting this evening and, yeah, I would be pissed too if I were her… I can understand where she is coming from and I fully endorse sticking it to a megacorp trying to screw people over.

Maybe Disney’s psyop worked on me for a bit… but I hope this doesn’t result in increased cost for every day Americans. We all know that CEO, other executives won’t dare take a pay cut. They’ll pass it on to us.

Sorry for my earlier inflammatory comments. It isn’t that I’m sexist or anything… I just feel like there is a major discrepancy in our nation between those with means and those without and we are supposed to sit here and feel bad for a person who already has means, and is seeking more means, while millions are facing evictions, foreclosures, etc.

To get back on topic, couldn’t Disney give her a cut of the streaming profits too and all would be well? Why don’t they just do that if they want their stars happy? Or does Disney not mind burning this bridge as Johansson is basically done with the franchise now?

They gave her a cut of Premier Access on top of her $20 million.

Maybe so but she wasn’t part of the revised plans apparently.

Here’s what Disney said, "Disney has fully complied with Ms. Johansson’s contract and furthermore, the release of Black Widow on Disney+ with Premier Access has significantly enhanced her ability to earn additional compensation on top of the $20M she has received to date,”

That doesn’t say that she received bonuses or a cut of the Premier Access.

Also, “Johansson’s attorneys said that when word spread that Disney+ could get first-run access to “Black Widow,” they got multiple written assurances from Disney that movie theaters only would have first crack at showing the action adventure.”

At no point did Disney reach out to any actor to renegotiate, and when Johansson’s lawyers reached out to Disney, they ghosted them. Disney’s own greed lead to this lawsuit.

And it looks like Scarlett got the ball rolling: Gerard Butler, who starred in the 2013 action movie Olympus Has Fallen, which turned into a franchise, has sued the film’s producers including Nu Image and Millennium Film in a profits disput…

Shes setting a precedent… I like it. Like said earlier if contract says ABC and you do AYZ your wrong and in breach. Get ya money this they job.

“Black Widow on Disney+ with Premier Access has significantly enhanced her ability to earn additional compensation on top of the $20M she has received to date,”

In some ways it sucks b/c it jeopardizes the future of the MCU. But I like Scar Jo taking a stand. Everyone keeps talking money and yes it’s important but it’s bigger than that. Big Biz no matter what industry has no ethics. The greed has to stop.

If that were true, they would’ve flat out said how much extra she got. They had no qualms about throwing out the $20M. If they really had given her extra, they would’ve said it by now.

Well the numbers aren’t in yet for the total Black Widow run for them to list the amount. If that statement is factual, she is set to make a cut of the Premiere Access on top of her $20 million.

If that statement was factual, she wouldn’t be suing them